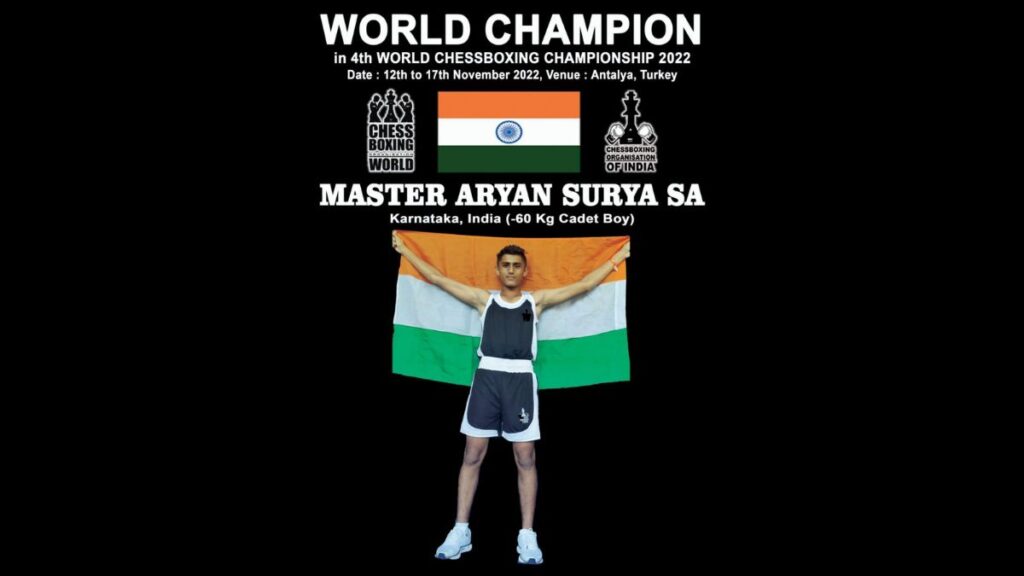 New Delhi, December 10: Aryan Surya S.A., a teenager from Bengaluru, is as versatile as it gets. From Chess to Cricket, from Karate to modelling and now being Chess Boxer, Aryan has left no territory unexplored. Born to Sunil C.S. and Amitha Sunil. M.R., Aryan is a Class 8‘A’ Jain Heritage School, a Bengaluru student. He has a keen interest in sports and loves participating in various sports and physical activities.

Aryan started displaying his talents at the tender age of five. His mother noticed that he was extremely fast at calculations and Abacus. Moreover, when Aryan was 6 years started playing chess, his mother noticed how proficient he was with his moves and strategies. The family members were quick to notice that Aryan was a gifted child. They realized that he had extraordinary potential and decided to give him every opportunity to harness that potential. They always encourage him and support him in every way possible. His mother especially tries her best to be there for Aryan and give him all the support he needs.

Aryan is also a very dedicated child. He spends nearly five hours every day working on his talents. He is driven by the idea of becoming better at whatever he does and is very passionate about sports as well. Aryan has received several prizes and awards for his extraordinary skills and talents.

Aryan is also a junior model and walked the ramp for Marks and Spencer (London) at the Sheraton Hotel, Bengaluru, in 2017. He also participated in the India Kids Fashion Week. In an online competition by Showoffclicks.com, Aryan won with the highest votes for his profile.

Aryan is also a talented athlete and sportsperson. He is skilled at Karate, safety Nunchaku and Chess Boxing. He won the Gold Medal at the International Karate Championship in Malaysia in 2019. He was the youngest kid of Karnataka to secure a Black Belt in Safety Nunchaku and participated in the International Combat Games held in New Delhi in 2019.

Aryan won the Gold Medal in Boxing in the Mini Olympics, 2022 (58-60 kg Boys 12-15 years) held in Bangalore, Karnataka, then participated in the National Sub-junior Boxing Championship at JSW Bellary in May 2022. Aryan also participated