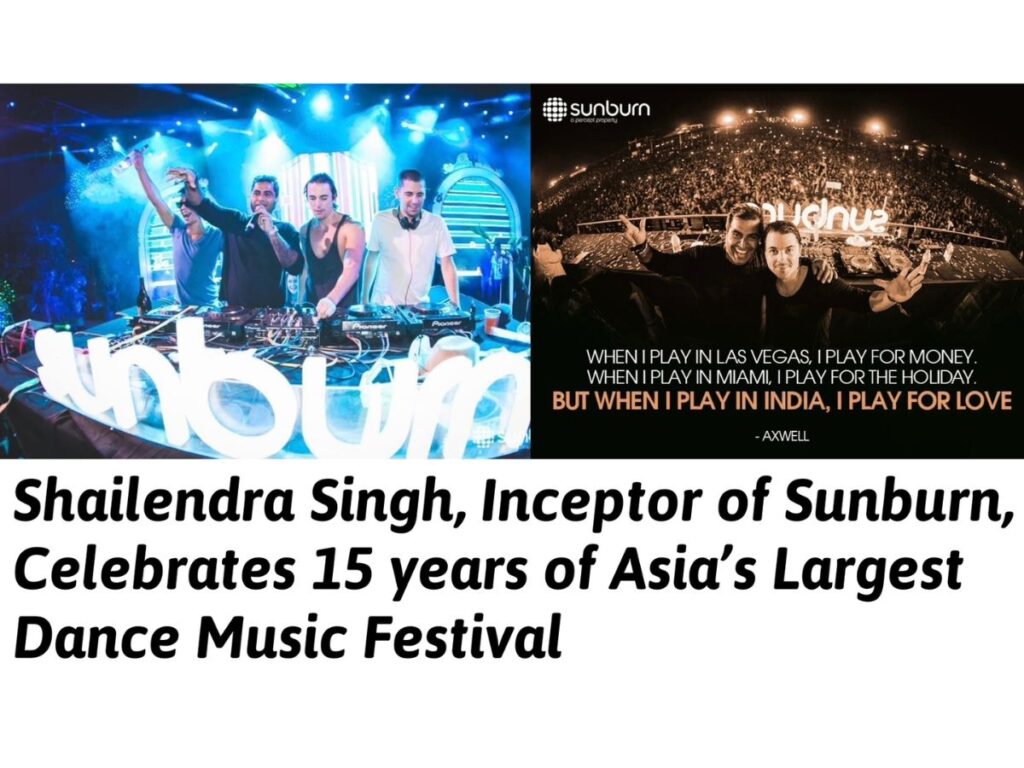 Mumbai (Maharashtra) [India], December 24: When he launched Sunburn as a small experiment on a Goan beach in 2007, Shailendra Singh wanted to make a social change for the youth of India – give them a new way to connect and celebrate. Now, fifteen years later, Sunburn has grown into the 3rd largest dance music festival in the world, changed the lives of the new, young India and put India on the global music tourism map. Shailendra Singh is celebrating.

The Inceptor of Sunburn, Percept Ltd, Guestlist4Good and Boss Entertainment says, “It is so important that the live music industry stays alive for the youth of the country. I am proud that Sunburn has not only changed the social landscape for the 600 million Indians under the age of 25 but bring economic benefit to Goa and every state that hosts an event. Sunburn is India’s intellectual property – created locally, famous globally.”

The festival has grown exponentially since the first edition in 2007, where a few thousand fans danced barefoot on the Candolim beach to headliner’s Carl Cox, Above&Beyond and Axwell. Despite all the odds, in 2008, Shailendra decided to hold the second festival in defiance of the terrorist attacks in November. Under his guidance, by 2013, Sunburn was the 3rd largest dance music festival in the world (IMS Business Report, 2013) and the largest in Asia. The second-only intellectual property to be exported after IPL, Sunburn had become a pride of India, caught the entire world’s attention and kick-started the whole live music industry in India.

The Indian market is now full of live music events, with local and global companies vying to bring in the best talents worldwide. Shailendra left Sunburn in the capable hands of CEO Karan Singh at Percept Ltd, who recently partnered with BookMyShow, to launch more intellectual properties in the field of live entertainment, with a particular focus on rebalancing the formula of commerce, creativity and cause. One of India’s most respected Serial Entrepreneurs, Shailendra Singh, has launched over 25 successful startups in his thirty-year career.

Says Shailendra, “There are so many stakeholders of brand Sunburn today that put in their emotions and efforts to make it a success. I salute all of them in this landmark year and wish them even more success in the years to come. And this year, I mention the Goa Tourism Minister, Shri Rohan Khaunte, who is inaugurating the first Goan Village experience at Sunburn! The festival truly is a pride of India.” Karan Singh, the CEO of Sunburn, is on record saying, “

That is 18,999 events that might never have happened without the massive success of Sunburn Goa paving the way.

Sunburn has always been a trendsetter; we were the first to enter the market, and have always been the most significant festival in India. We are growing bigger and better in terms of artist, production, technology, stages, and experiences.”