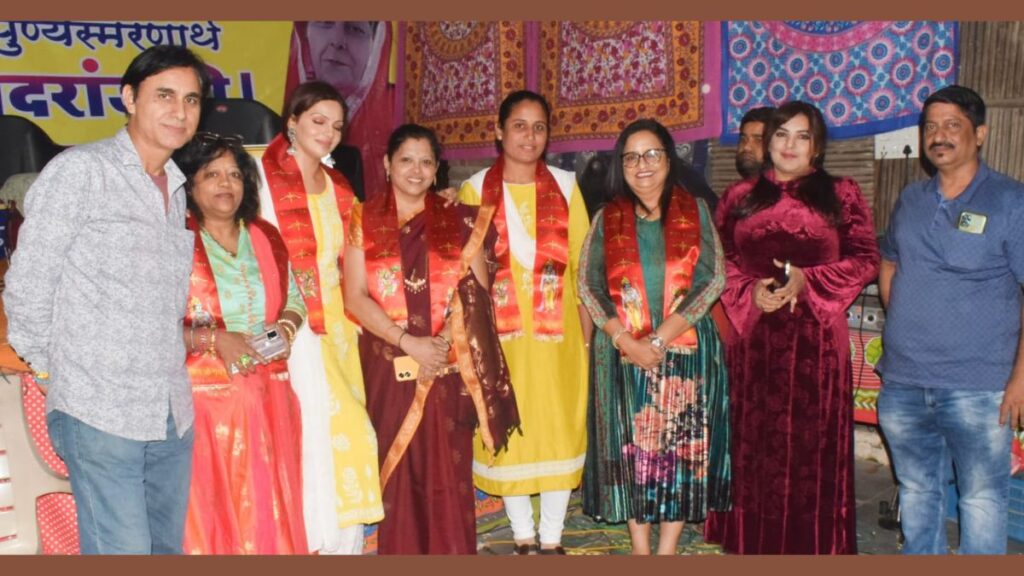 Mumbai (Maharashtra) [India], January 09: Premier of the heart-touching short film, Aarohi was held in Baba Bhaskar Vridhashram (Old age home) in the presence of all the senior elderly aged inhabitants of the Ashram; the artists of the film and other dignitaries. The film is a VS Nation YouTube Channel presentation and is produced under the Taal music and films banner. Everyone watching the Premier show liked the film and appreciated the new concept, creative thinking & writing

of the story. Elderly aged persons living in the old age home could relate the story of Aarohi to their lives.

They became very emotional & appreciated the film with teary eyes. A devotional musical program was also conducted on this occasion. Artists from the Urja foundation, together with Bhajan singer Sonu Gill, Playback singer Soma Banerjee and others, have performed to showcase their singing talents.

The film Writer, Producer and Director, Mr. Devindra Khanna, has dedicated the film to all the senior elders living in Baba Bhaskar Vridhashram and pledged that whatever income he generates from this movie, he will donate to this Ashram for the welfare of the elderly people. The film Aarohi is a story of a mother and daughter relationship. The emotion running in the film is beautifully crafted & filmed by the Director, Mr. Devindra Khanna.

During the conversation, Mr. Devindra Khanna briefed about the film and told  it’s a story of a young girl who lost her mother. The girl Aarohi was born into a poor family. She developed an interest in music & singing; wants to be a successful singer, but it is not easy to achieve due to poverty and the environment she is living in. Like any other mother, Aarohi’s mother also struggles and scarifies all her personal needs & aspirations, happiness & comforts undergoing hardship to fulfil the need of her daughter Aarohi in achieving what she wants to be. Finally, when Aarohi achieves success in her pursuit of being a singer and well-known face in the industry, her mother is not around to celebrate and share the joy of success.

Aarohi is missing her mother’s presence, love & affection after getting success. She feels lonely. She wants to share her happiness with her mother but can’t as she passes away. So she thinks of adopting a mother instead; and visits an old age home. Generally, people come to Old Age homes to keep their mother or father; OR a childless couple visits an orphanage to adopt a child, but she visits the Ashram to adopt a mother, so it is surprising to all the ashram staff; especially when they see a young lady wants to adopt an old lady as her mother.  This is worth mentioning here that the writer, producer & director Mr. Devindra Khanna produced various music videos under the Taal music and films banner 20 years ago also, so it was like a reunion of the team.

Mr. Davinder Khanna told, “The story of Aarohi has been in my mind for a long, and I was waiting for the right moment & place to shoot the film”. Finally, he produced and released the film successfully. So he is very happy. He thanked all the artists, actors, actresses and supporting staff for making this happen.

Now he requests everyone to watch the film on VS Nation YouTube channel (https://www.youtube.com/watch?v=x0nBVghNoog ) to know what happens next when Aarohi decides to adopt a mother from Vridhashram (Old Age Home). He also requests audiences to like and write comments. He, as a writer, producer & director, would like to know how the audiences rate his work and what they think of this creativity. Will Aarohi be able to adopt a mother? Will the Indian Legal system allow her to adopt an adult? Please watch the film (https://www.youtube.com/watch?v=x0nBVghNoog ) to know the end of the film. It’s a new concept, and also very good for the young generation to realize the importance of mother & father in life.